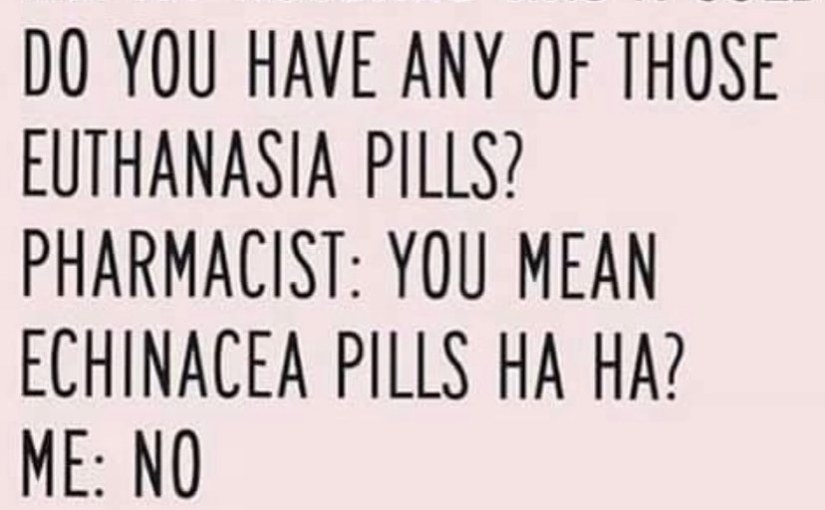 There is so much I can’t write or say, but I’m so tired I could cry. My son is homeless and in dire need for help, the step kids are home due to winterbreak aaaand we all have caught the flu and are pretty whiney and tough to be around.

I love all my kids to death, but I need sleep or a wall to wall bed with room enough for 4 people a dog and a cat… I mean it. If the kids come into our bed tonight as well, I’ll be enjoying my first night on the couch. I might anyway af B is grunting and talking in his sleep as if he was trying to persuade me into buying the LEGO tree house.

So nope. We are sooo not saving any money this week. Medicine. Gas for transportation for the doctor and helping my kid. Sugary foods and snacks or whatever people have ordered due to their sickness and lack of appetite. Off course as “the mom” I have yet to indulge in my own flu, and are seen as the service provider.

I had an acute case of asking the pharmacy about this:

Luckily the week is over soon, and… I actually DID save some money. Although spending on stupid things….

We made it through Christmas and new years eve…and no. We didn’t manage to stay frugal. Actually it went the other way. Having the small ones for the first time made us lose our focus, but it’s fine. My adult son was home too. Next year is without kids, and it’ll be an entirely other level. We spent the night with B’s sister and this was all the presents, primarily for the three small kids there, but I was showered with love in the form of presents as well.

Getting married in a few..five…months time, B decided that my golden and simple engagement ring should have a tiny diamond. We had originally agreed on just moving it from one hand to another, but he wanted to make sure it was something special after the wedding. I was happy to learn he made an effort to make sure it wasn’t blood-diamonds, but it did cost a bit extra. We will add it to the ring in may a few weeks before the wedding.

New years eve we spent alone. We needed it. And I got to test my crockpot for real by making brisket. It was amazing. So was the homemade “kransekage” because in Denmark you can’t have new years eve without this. Most people buy it, because it’s pretty sticky and they think it’s too much work, but that’s because they’ve never tried it. If you can live with the amateur look it’s better than the store bought one. The recipe should be with the picture.

January has, so far, brought knowledge that adding your credit card to Google play is a shitty idea. I didn’t…but B did. And we decided to check out how much money had used on his games…which created a relationship crisis. I won’t say how much he spent the last 18 months, but… me deciding to try to save money on my wedding dress and foods and so on because “we don’t have a lot of money”…. I felt betrayed, and he was not in his proudest moment to say the least. He didn’t realise the amount until then.

Buuut… You can only fix what you know what’s broken, so we took off the possibility to buy stuff online, and got him an old nokia. Which actually freed a lot of time together as well. Maybe some day he’ll be back on the android, but we’ve talked about waiting until after the wedding just to keep it safe.